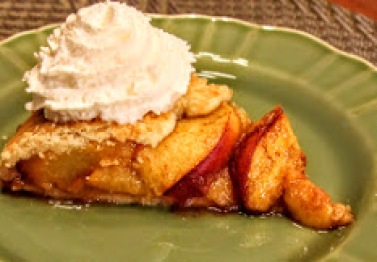 A crostata (aka galette if you’re in France) is basically a free-form pie that is a little less sweet and a little heavier on the crust, both features that suit my tastes well. It’s also easier than pie, literally, and I feel like it doubles as a breakfast pastry. (Okay, I feel like pie doubles as a breakfast pastry too but this really is less sweet.) You can use just about any kind of fruit; apples, berries, cherries, pears… I recently made a sweet/savory one with pluots and figs that I topped with blue cheese and pecans, big hit with the book club. This recipe showcases fresh peaches, in season now!

1 pie crust (store bought, thawed OR follow the recipe for  Tender Pie Crust and use half the dough)

Slice peaches, not too thin, into a large mixing bowl. I leave the skins on but you can remove them if you like. 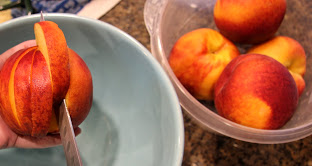 Add sugar, maple syrup, cinnamon, and salt. Gently toss with a wooden spoon or rubber spoon/spatula until the peaches are coated. Set aside. 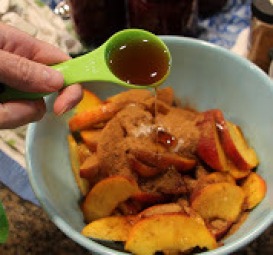 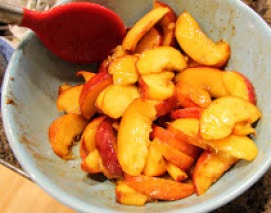 Roll out pie dough into an (approximately) 12 inch round. 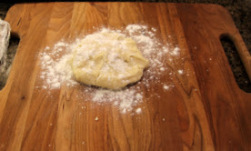 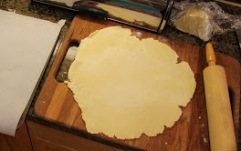 Gently fold the dough in half, then half again and transfer to a sheet pan lined with parchment paper (you could also use aluminum foil or silicone pad). Unfold the dough to its original round shape and place the peaches in the center, leaving the remaining liquid in the bowl for now. 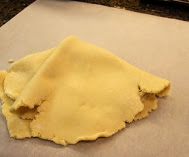 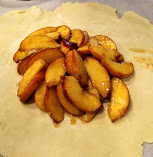 In about 6 sections, fold the crust up about one-quarter of the way over the peaches, crimping the sections together as you go. Don’t worry about it looking perfect, the most important thing is to not have cracks or holes that could release the juices as it bakes. 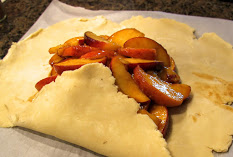 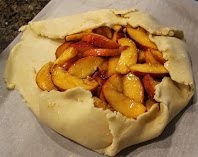 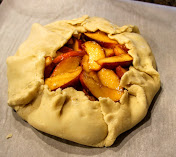 In a small bowl, whisk the egg with 1 tsp water to make an egg wash. Thoroughly brush the crust with the egg wash (you will only use a small amount, stick the rest in the fridge and add it to a scramble). This will help seal in the juices and make the crust a prettier, shinier golden brown color.

Pour the remaining liquid from the peach mixture in the center of the crostata. 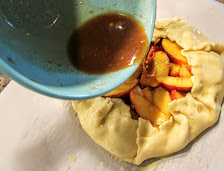 Sprinkle the turbinado sugar evenly over the crust for added crunch and sweetness. 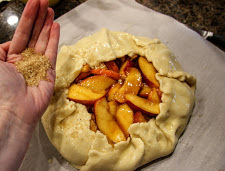 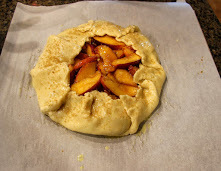 Bake in preheated 375 degree F oven for about 40 minutes. The peaches should be bubbling and the crust golden brown. Allow to cool for at least 15 minutes before cutting and serving. Enjoy with vanilla ice cream (or coffee if you’re having it for breakfast!). 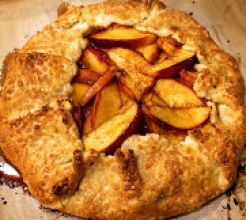 I think we all know someone (or several someones) like the poor earthworm. Don’t let them steal your sunshine!

“Poor earthworm,’ the ladybird said, whispering in James’s ear. ‘He loves to make everything into a disaster. He hates to be happy. He is only happy when he’s gloomy.”