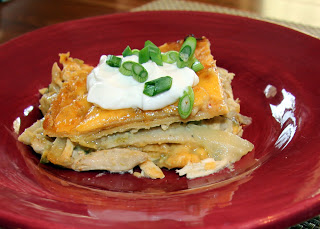 I have been asked for this recipe by a few different people so here it is – finally! I like to make it for larger groups and potlucks as it feeds up to twelve people. There are quite a few similar recipes for this type of casserole. I think what makes this one different is the chili cream sauce I came up with. It adds a nice depth of flavor and extra creaminess.

A rotisserie chicken from the market works very well for this recipe if you don’t want to cook your own. Just remove the skin and shred the meat away from the bones with two forks. It should yield @ 1 lb.

Meanwhile, start your sauce. In a medium saucepan over medium heat, stir together butter and cornstarch or flour with a wire whisk until smooth. Allow to cook for a couple minutes, stirring almost constantly. (Congratulations to beginners, you just made a roux!)

Gradually add chicken stock and and milk, stirring constantly and briskly until well incorporated. If you’re new to this, be warned that the mixture is going to seize up and become very thick after adding the first small amounts of the liquid. Stay with it and keep stirring and adding the liquid and you’ll be fine!

Add chili pepper in pieces (kitchen shears work well) and stir in the rest of the spices.

Allow sauce to cook over medium heat until it thickens a bit. It should be a little thicker than heavy cream.

Strain the sauce into a large bowl to remove the chili pepper – it’s done it’s job. Set aside.

When the onions are lightly caramelized, add chicken and  diced green chili peppers.

Then add salsa verde (the Safeway brand is good) and sour cream and stir.

Before you begin assembling the casserole, soften your tortillas in a hot pan, with a small amount of oil. It just takes a minute or two for them to soften, make sure to get both sides. To be honest, I find this step quite tedious but necessary. If you want to go rogue and skip it, I understand but can’t promise as good of an outcome.

Finally, we’re ready to assemble! You’ll notice I’m using two casserole dishes. I was taking one to my moms-of-multiples retreat and leaving the other for my family.

Normally, I would just use a 9×11 pyrex pan or my large dutch oven and I suggest you do the same.
Make sure you have your tortilla, sauce, cheese and chicken mixture handy. Spray pan with non-stick spray or oil it. Start with a little sauce…

Add a layer of tortillas. Have your way with them and tear them to fit if you want. Go crazy.

and start all over again. Repeat until you’ve used all your ingredients.

It’s important to end with enough sauce to cover the tortillas then add a good layer of cheese on top!

Cover with foil (I highly recommend spraying the foil with non-stick spray before placing over cheese!) and bake for 45 minutes.

Remove foil and bake for another 15 minutes or until the  cheese is starting to brown on top.

Allow casserole to rest (it’s very tired) for 15 – 20 minutes before serving. Top with a little sour cream and more salsa if you like!

I just read a book called Dying To Be Me: My Journey from Cancer, to Near Death, to True Healing by Anita Moorjani. It was very powerful, as was Wayne Dyer’s new book titled Wishes Fulfilled. I “randomly” came across Dyer’s PBS special on which Moorjani was a guest, and was compelled to download both books to my kindle. After reading them both, I’m feeling less fearful and more excited about life. I need reminders every now and then! Dyer ended his book with this poem by Rumi. He says remember…

View all posts by auntie

I'd love to hear your feedback! Cancel reply

Robert Karl Schubert⁠
December 28, 1966 – January 11, 2022⁠
⁠
There is a link in my bio to today's blog post. We had my husband Bob's celebration of life last weekend, and I recap it for those who couldn't be there, along with a memorial video our daughter, Ella, made. 🧡⁠