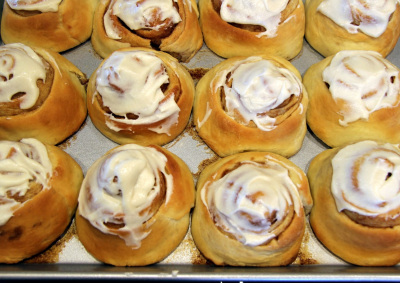 Mother’s Day brunch always reminds me of my mom but for reasons you probably wouldn’t expect. You see, we served brunch at the restaurant and Mother’s Day was always the busiest Sunday of the year. My mom, who was often doing host duty (she worked 50 – 60 hours a week on her feet until the restaurant closed when she was 68) would see families, in her words, “parade” their elderly mothers out of the nursing homes and in to the restaurant. Now, I’m sure most of these ladies were actually having a wonderful time, happy to be out to a nice meal with their loved ones but my mom thought it was horrifying. She would tell us every year, in no uncertain terms, that if she ever became to old to care for herself we were to put her in a “home” and leave her there! We would just sort of laugh and say yeah right, okay mom, whatever. We knew she meant it though and, although I would rather had many more years with my mom, she did not want to be an old person who was unable to care for herself, and she wasn’t. Dignity was of utmost importance to her. She was diagnosed with breast cancer when she was 69 and passed less than a year later. I miss her every day and I could go on and on about how great she was but I’m starting to get a little teary so I’ll move on…

My beautiful mom circa 1950
I made countless batches of these cinnamon rolls for brunches at the restaurant but I feel like I never really got them right until recently. I was always in too big of a rush so, while they were good and people really liked them, they were never as soft as they should be and they had raisins in them which was completely unnecessary unless you actually like raisins. Now that I have begun making them at home, I realize the key is to have a sticky dough, adding just enough flour so you can work with it but no more than that. That and substituting melted butter for the oil in the dough recipe doesn’t hurt either. I’m pretty sure that’s what Grandma did.
I had a chance to make these with my girls for Easter Sunday this year. We ended up making three batches of Grandma’s roll dough because were taking them to a brunch at a friend’s house, we wanted some for home and we also needed plain dinner rolls. It was such a fun experience because we each had our own batch and Ella and Hailey got to feel the pride of making the sponge, watching the dough rise and, finally, join in the great fun of rolling up the cinnamon rolls. I love that they will grow up knowing that, although it is time-consuming, making bread from scratch is pretty simple and greatly rewarding. I’ve included a link below for the dough as I’ve already posted the basic roll recipe. As I said, this process does take time but it’s mostly inactive wait time so, if you’re inclined to try it, pick a day when you’re going to be hanging around home. It will make laundry day loads more fulfilling… (I know, I’m hilarious)
To get started, follow the recipe for Grandma’s Rolls, making sure the dough is soft and sticky. One batch will make about 12 cinnamon rolls.
Make your filling by mixing  1/2 cup brown sugar, 1/2 cup white sugar and (at least) 1 TB cinnamon together in a small bowl.

Prepare a large cutting board or counter top by sprinkling lightly with flour.

Once the dough has risen, turn it out on to the board. Rub some flour on your hands to help handle the sticky dough.

Gently pull the dough with your fingers (you could also use a rolling pin) until it is a large rectangle, about 18″(across) x12″.

Using your fingers, spread 1/4 – 1/3 cup softened butter in a thin layer to cover the entire rectangle of dough.

Follow with sugar and cinnamon mixture, again a thin layer to cover the entire rectangle of dough. Fun right?

Next, begin rolling, pretty tightly at first, using your fingers to stretch the dough a bit and roll it over on itself.

Continue rolling until you reach the top, your dough may begin to form an upside down U as it grows and stretches across the board.

Make sure you press the dough firmly on your last roll to avoid a large “seam” and keep it rolled tight. If you need to “glue” it down with a bit of soft butter at this point you can but your dough should be sticky enough to stick to itself.
At this point, you could wrap your dough up in plastic wrap and refrigerate overnight if you don’t want to bake it right away or you can proceed to the next step.

Preheat oven to 325 degrees. Cover rolls with cloth and set pan in a warm place for 1/2 hour – 1 hour, until risen and puffy in appearance.

Bake in preheated oven for 25 – 35 minutes or until golden brown and gorgeous. Allow to cool a bit while you make your glaze.

Spread glaze over warm (not hot) cinnamon rolls with an offset spatula or butter knife. Eat right away or cover and store for later.
I love this and I highly recommend Dr. Northrup’s book Mother Daughter Wisdom for any woman who is a mother to daughters, or seeks healing and understanding in her relationship with her own mother.
“My prayer for mothers and daughters everywhere, is that each of us be willing to support each other as we birth the highest and best lives possible.
That we learn to honor and respect each other without requiring undue sacrifice.
That we become willing to forgive each other for the pain and the hurt we may have unwittingly caused each other.
That we honor each other as powerful teachers.
That we know our fierce mother-bear wisdom lives in every cell of our bodies and is always available, even when our own mothers are not.
That we know we can call on our grandmothers for guidance whenever we need it.
And finally, that the mother-daughter relationships of the future become so steadfast and supportive that when a woman says ‘I’m becoming just like my mother’ she will beam with pride and her friends and family will proclaim, ‘Well done!’.”
Dr. Christiane Northrup, Mother Daughter Wisdom
Pin4
Share53
57 Shares