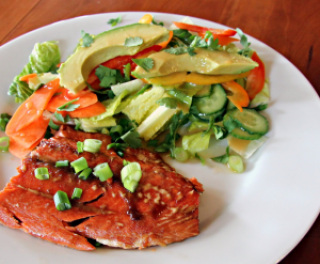 This dinner made me really happy. The salmon with ginger soy glaze and the fresh veggie salad had all the flavor and texture components to create a satisfying meal with no rice, bread, or potatoes in sight!

Sadly, after a great vacation in San Diego, my starch party is over. It was fun while it lasted (and we all know it will begin again, but, hopefully, not too soon). Our hotel was right across the street from Panera Bread, which was dangerous, but not nearly as bad as when we lived directly across from Panera Bread in Arlington Heights, IL. As Bob says, we were larger then. I was, surprisingly, able to resist their french toast bagel that I used to be so fond of but, let’s face it, their breakfast sandwiches on a large Ciabatta roll weren’t much better (although they did have some protein to slow down the starch). We ate those every morning except one when I had a need for a strawberry waffle. I was lucky enough to find Richard Walker’s Pancake House, which, as I had hoped, was of the same family as Walker Bros in Chicago. They had the same fantastic strawberry waffle! Crispy waffle, ripe berries, real whipped cream, and hot maple syrup with thick bacon on the side. My perfect breakfast.

So, you can see why I need to put the brakes on the carb-fest. I won’t even bother to tell you about our lunches and dinners that usually began with large piles of tortilla chips if they didn’t start with a sourdough breadbasket. It was so worth it, and I have no regrets, but life requires balance, so it’s time for lots of veggies and protein. Luckily, those can be very tasty as well if you know how to liven them up a bit.

Begin by soaking a cedar grilling plank in water for at least 30 minutes and up to 4 hours, so it doesn’t burn up on the grill. The plank not only adds great flavor to the salmon, it also makes cooking fish on the grill a lot easier. We buy them every summer at Costco in packages of six and use them for all kinds of fish. I placed a bowl full of water on top to sink it as it tends to float.

While the plank soaks, make your glaze. Whisk together brown sugar, sesame oil, soy sauce, ginger, and Sriracha in a small bowl until thoroughly combined. Set aside to allow the sugar to dissolve and the glaze to thicken slightly.

Meanwhile, make your salad and dressing (instructions below), then preheat your grill.

When the board is sufficiently soaked, remove it from the water and place the salmon on it. Liberally, brush the glaze on the salmon.

Place board on preheated grill, turn it down to med-low heat and put the cover down. It should maintain @ 350 degrees (if you don’t have a temperature gauge, it’s not a big deal).

Allow salmon to cook for @ 20 minutes. The glaze should be caramelizing on the edges and the flesh should  be lighter pink and have white stuff forming on top (it’s protein/albumin).

Combine all ingredients in a bowl and blend together. Taste. If it’s too sour, add more honey, if you like it spicier, add more Sriracha, etc.
Dress your salad and serve alongside the glazed salmon. Delicious!

“Life is a series of natural and spontaneous changes. Don’t resist them – that only creates sorrow. Let reality be reality. Let things flow naturally forward in whatever way they like.”
Lao Tzu
Pin3
Share
3 Shares

Spa days are exhausting 🐾
He was a very good boy. His groomer called him a “ham” (correct!) and said she’d love to have him back. 🧡

Yes, my measuring spoons do get super chatty. ⁠
Seriously though, did you know that digestion begins at the sight and smell of food? I'm sure even the sound of sizzling plays a part. The body primes itself to absorb nutrients as the food is being prepared—just one more reason to consider cooking at home more often. ⁠
⁠
Check out the blog for recipes with step-by-step instructions. Link in bio!

I could eat this every day… 🍏

All the flavor with far fewer carbs than traditional Spanish Rice. This is a great recipe for frozen or fresh cauliflower rice.⁠
⁠
Recipe link in bio 🧡⁠
⁠

New blog post today! Make it vegan by skipping the dairy on top. I think you'll be very happy. ⁠
⁠
Link in bio for the recipe 🥕

Stay warm and nourished this fall with delicious, veggie-packed soups. Find recipes for immune-boosting soups like Chicken with Thai Basil, Italian Vegetable, and Kale, Celery, and Spinach Soup; hearty soups like Italian Sausage and Potato, Chicken and Chickpea Taco, and Gluten-Free Potato; and flavor-packed soups like Spicy Tomato with Basil Pesto, Spinach and Green Chile Cheddar, and Green Curry Chicken on the blog.⁠
⁠
Link to recipes in bio! 🍅🥔🥕⁠
⁠
Get together with friends for a soup exchange! It's a great excuse to catch up over some wine, and everyone gets to go home with a variety of soups to stick in the freezer for busy weeknights. ⁠

I made a little more progress on the cookbook tonight with pan seared filet mignon and Chef Billy’s bordelaise sauce. I can’t wait to share all these recipes with you! 🧡

Treat yourself and your people by baking warmly-spiced pumpkin scones with sweet maple icing. Sometimes I top the icing with toasted pecans or hazelnuts for next-level deliciousness. ⁠
⁠
Celebrate fall! Celebrate everything you can! 😉🧡🍁⁠
⁠
Link to recipe in bio!