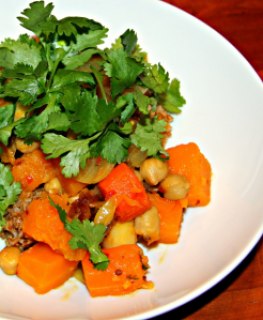 Well, that was fun. You know it’s over though when you catch your 4-year-old in the pantry sneaking chocolate chips out of the bag. It’s very hard to reprimand her when you (in this case, me) were, yourself, sneaking into the pantry to break the belly off the chocolate Santa Claus that you had devoured the head off of earlier that afternoon (in secret, of course). You know it’s time then, to give her the kind, though hypocritical, speech of how she needs to just ask you, there’s no need to be sneaky. Then you put all the remaining chocolate way up high, out of the reach of both of you as well as her sister, whom you caught with a handful earlier in the day.

Ah yes, it is sobering to see your bad habits being played out by your offspring. Hopefully, it will stop at the chocolate. The thing you need to know about the Santa is that he was the third (maybe fourth), See’s chocolate Santa I had consumed since Christmas day. For those of you not familiar, they’re not small. I came to the realization that they are probably the single most emotion-packed, therefore very addictive item of food I consume. I don’t think I ever had a Christmas without them as a child. I say “them” not just the “one” I got in my stocking because I’d usually end up with four or five per year. You see, I had five older siblings, four of whom had spouses by the time I was a teenager. They all got Santa’s in their stockings and often would leave them behind when they left for their own homes. I couldn’t believe my luck! The thing was, though, I had to steal them away before my mom saw that they were still there, so eating them was always solitary and secret. Pretty interesting that I still, at the age of 42, feel the need to eat them that way, although now I’m hiding from my husband and children. I know… it’s more than a little pathetic.

Anyway, the point I’m taking a very long time to get to is, it’s time to restart the system. After consuming everything my heart desired for a month and taking a break from my daily walks, the jeans are getting very uncomfortable. Also, I hate to admit because it makes me seem old, but my arthritis in my hands is getting worse. I’ve read that following an anti-inflammatory/clean diet can really help both conditions so that’s my gig, at least for a while. The big thing to avoid is refined sugar and highly processed foods. Hmmm, where have I heard that before? Oh, that’s right, everywhere… must be something to it. I’m also giving myself a break from dairy, just for fun. I will miss cheese dearly but I don’t plan to abstain forever. As long as I can have my Green & Blacks 70% Dark Chocolate, I’m good.

I found this recipe on the Bon Appetit website. It was featured in their 2011 Food Lover’s Cleanse and I’d thought I’d give it a try. I thought I might give the whole cleanse a try but the shopping list overwhelmed me and I couldn’t commit. So, I’m picking recipes I like from it and the 2012 Food Lover’s Cleanse. London chef Yotam Ottlelenghi is highly acclaimed for his imaginative use of vegetables and his successful London take-out shops that are described on the Ottolenghi website as “haute couture of the food to go world”. I found this dish to be extremely satisfying and I love the different flavors it offers. It has considerable heat so you may want to adjust certain spices according to your taste. The most difficult part of the dish, for me, was assembling all the ingredients but I was fairly unorganized about it. Just remember to buy the special spices you don’t use on a regular basis in small amounts by visiting the bulk section of your grocery store.

Preheat oven to 375 degrees and prep your veggies

Place carrots, parsnips, shallots and all the spices that follow (up to/including the chile flakes, use 3/4 tsp of salt) in a large, ovenproof pan with 4 TB of olive oil. Cook in preheated oven for 15 minutes. 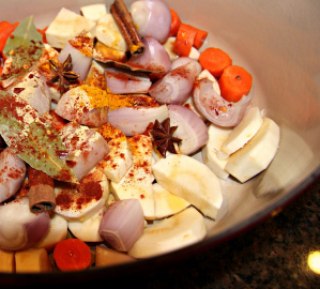 Add the pumpkin or squash (I used pre-cut butternut squash) and bake for another 35 minutes or until the vegetables are cooked through, but still slightly firm. 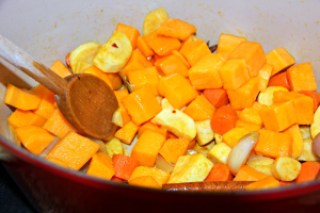 Meanwhile, prepare your couscous or, in my case, bulghar wheat (lots of fiber and nutrients!) as directed on the package it comes in. 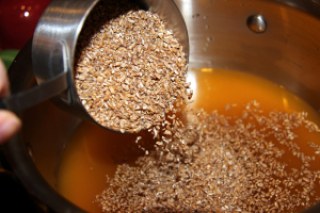 Add the saffron, remaining TB of olive oil and 1/2 tsp of salt and let stand for @ 10 minutes. You may then add the butter and fluff with a fork. (I skipped that part). Keep warm until serving time.
(Saffron is very expensive and, while it adds a wonderful, earthy flavor to the dish, I think the dish would still be outstanding if you skip it. The Scotch in me had a hard time with the purchase but I don’t regret it.

Add the dried apricots, chickpeas and cooking liquid/water to the cooked pumpkin/squash mixture. Return to oven and cook for another 10 minutes, until hot.

Remove from oven and stir in the harissa (http://en.wikipedia.org/wiki/Harissa) and preserved lemon. Add salt to your taste. I did not have any preserved lemon so I used peeled fresh lemon cut away from the pith (white part). One lemon produced one ounce. 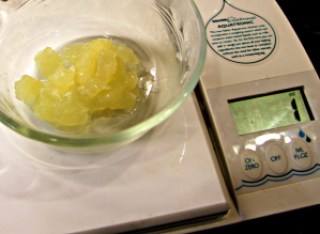 Serve over couscous or bulghar wheat and finish with plenty of cilantro leaves. The cilantro is very important as it adds a cooling element to the dish.

Enjoy and prepare to be quite full! I was pleasantly surprised to find I really like bulghar wheat, having never tried it. Bob liked it as well! It was far too spicy a dish for the girls although Hailey did try a chickpea and declared it delicious!

auntiechatter
•
Follow
The last line of this song I have listened to countless times, really stuck with me when I heard it a few days ago. It got me thinking about one of the greatest gifts we can give.⁠ Grace.⁠ Before rushing in to judge, or scold, or teach a lesson, pause a minute and think about how differently the conversation might go if it's approached with grace and compassion. ⁠ ⁠ Jackson Browne wrote this song when he was sixteen years old.⁠ I think teenagers need the gift of grace perhaps more than anyone. They are well aware of their shortcomings. ⁠ Build them up.🧡⁠ ⁠ ⁠ ⁠ ⁠ ⁠ ⁠ ⁠ ⁠
View on Instagram |
2/9

auntiechatter
•
Follow
Buttery, crisp but a little chewy, not too sweet, heavy on the oatmeal and chocolate chips; they're everything I want in a cookie. ⁠ ⁠ Link to the recipe in my bio! 🤩⁠ ⁠ I made these last week, and I have to admit, they didn't last long enough to make it to the cookie jar, partly because we ate them almost as fast as I could bake them. Also, I refrigerated the dough and baked them in small batches over a few days. There's nothing like freshly baked cookies!⁠ ⁠ ⁠ ⁠ ⁠ #oatmealchocolatechip #auntiechatterrecipes #lonelycookiejarblues #cookiejar #bake #homemade⁠ #cookies #chocolatechip #cookiesofinstagram #instacookies #baking #cookietime #cookielover⁠ #chocolatechipcookie #cookiemonster⁠ #cookie #coconutsugarrecipes #bendblogger #comfortfoodcookies #bakingcookies #soulsatisfying #momsfavoritecookie #learntobake #freshlybaked
View on Instagram |
5/9

auntiechatter
•
Follow
This takes practice.⁠ One of the most challenging concepts is that it is all up to us. ⁠ It can also be wonderfully liberating. ⁠ Try to find a moment of pure joy today. It can be as simple as sipping delicious coffee, listening to your favorite song, or snuggling with your dog. ⁠ Notice it. Feel it. Share it. 🧡⁠ ⁠ ⁠ ⁠ #findjoy #bethelight #spreadkindness #itsalluptoyou #yougetwhatyougive #gratitudeisagift
View on Instagram |
6/9