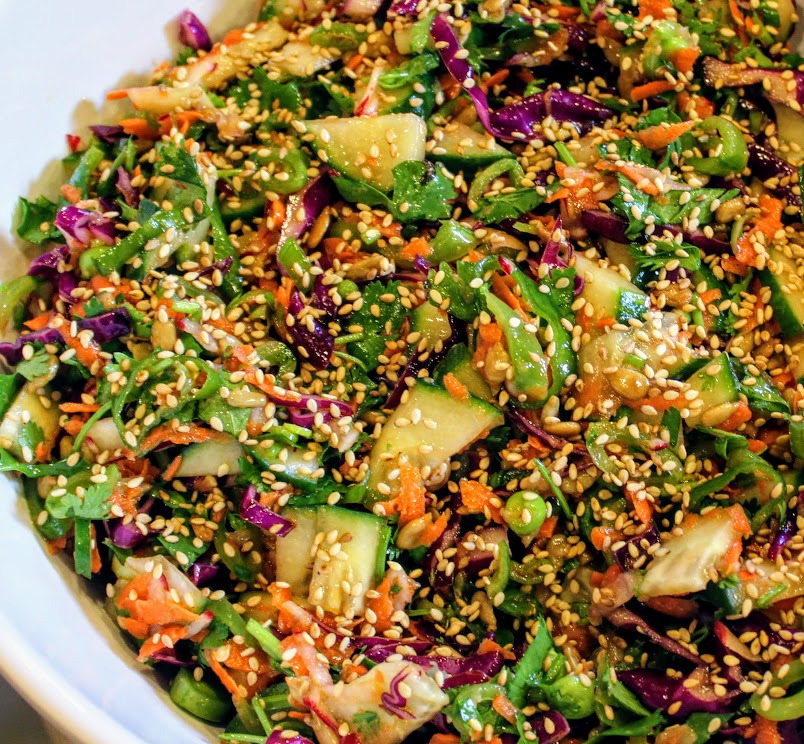 Don’t be intimidated by the number of ingredients. Most of them are fresh vegetables and you certainly don’t have to use them all. As long as you start with the cabbage you can omit or add any veggies you want.  Just make sure you steer clear of tomatoes, mushrooms, spinach, or any other vegetable that will become mushy and stick to heartier, crunchier types. For example, broccoli, bell pepper, brussels sprouts, jicama, and cauliflower would all work as well as the ones listed below. The dominant flavors come from the sesame and ginger in the dressing, the crunchy nuttiness of the sesame and sunflower seeds, and the fresh finish of the cilantro. If you have an aversion to cilantro, try substituting Thai basil, chives, or even mint. If you want to add some heat, throw in a few jalapeno, serrano, or Thai chile peppers.

This is a great make-ahead side to pack up for a summer picnic or barbeque. I think it’s at its best after sitting, refrigerated, for about 2 hours but you can also serve it right away. If you’re going to make it a day ahead, keep the shredded/chopped vegetables separate from the dressing in the refrigerator and toss them together, along with the seeds, the day you intend to serve it.

Make sure you have a sharp knife and a large bowl!

(Measurements are approximate, you should end up with 10 – 12 cups veggies)

1 bunch of cilantro, roughly chopped (if you substitute with Thai basil, chives, or mint, use about 1/4 cup chopped)

Gather ingredients for the dressing. If you are serving the slaw within a few hours, go ahead and make the dressing in the bottom of an extra large mixing bowl. If not, make it in a separate, medium-size mixing bowl.

Using a sharp, fine grater (like a Microplane) grate the peeled ginger and garlic into the bowl.

Add lime juice, soy sauce, rice vinegar, honey and combine with a whisk. Briskly whisk in the sesame oil until well combined. Refrigerate dressing if you’re not tossing it in right away.

Slice the cabbage very thin using a sharp knife or mandoline. (Or use pre-shredded from the market, I won’t tell.) Place in the bowl with the dressing and toss to coat.

Slice, shred or chop the rest of the vegetables and cilantro and place them into the bowl with the cabbage.

Add 1 tablespoon sesame seeds, the sunflower seeds, and the cilantro. Toss the slaw until all the vegetables are coated with dressing.

Garnish with remaining tablespoon of sesame seeds. So pretty.

Summer starts tomorrow. Make the most of it!

“And so with the sunshine and the great bursts of leaves growing on the trees, just as things grow in fast movies, I had that familiar conviction that life was beginning over again with the summer.”
― F. Scott Fitzgerald, The Great Gatsby