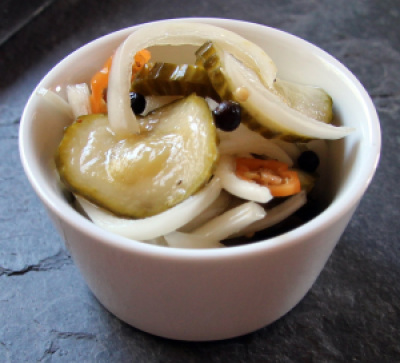 Have you ever made your own pickles? Neither had I but now, everything has changed. I don’t think I can ever go back to store bought. That might be a slight exaggeration but, really, only slight. You see, when you make your own, you can customize them exactly to your taste. You can add habanero pepper to spicy bread and butter pickles to give them just the right amount of heat. You can have whatever cucumber to sweet onion ration you like because you think the onions are as delicious pickled as the cucumbers! You can avoid high fructose corn syrup and tons of added sodium. Need I say more? Okay, well, you can also brag to your friends that you made your own pickles. I wouldn’t recommend trying to brag to your children. Mine were not at all impressed and roll their eyes at the mention of pickles. I still seem to keep mentioning them though…
Besides the bread and butters, I also made garlic dills which I will be sharing very soon, maybe as soon as my next post. I used English cucumbers from Costco but you can certainly use smaller pickling cucumbers (sometimes called Kirby) if you wish. You just don’t want ones with lots of seeds like you generally find in the grocery store. If you don’t want the added heat of the habanero, you will still get a good result just be sure and add the black peppercorns because you will need a little heat for balance of flavor.

2 English cucumbers (@ 1 1/2 lb)
1 large sweet onion (Walla Walla, Vidalia, Maui Sweets or the like)
1 medium size habanero pepper
Note: Feel free to use more cucumbers, less onion if you like. You could even add another crunchy vegetable like a sweet bell pepper, keeping in mind the other veggies can be very tasty on a sandwich, in a relish, etc. along with the cucumber. The important thing is to have enough to pack in the quart jars. I actually think I was a little shy on vegetables and could have packed more in but I’m learning as I go. I adjusted the amounts in the recipe accordingly.
Place all of the ingredients for the brine in a medium-size, non-reactive saucepan, (that means no aluminum or copper, stainless steel is your best choice). Stir to combine; then, on medium-high heat, bring to a boil before pouring over vegetables.

Slice cucumbers about 1/4 inch thick. It really helps to have a mandoline slicer, just please be careful and use the guard that comes with it.

Place cucumbers and onions in a large bowl to toss.

Slice habanero pepper in to thin rings. Be careful to wash your hands thoroughly after handling the hot pepper, you could even use plastic gloves so you don’t risk touching your eyes.

Pack cucumbers and onions into clean quart size mason jars, layering 4 – 5 habanero rings in each as you go so they are evenly dispersed.

Fit a large mouth funnel into the top of the jar then pour the hot brine over the vegetables.

Leave a bit of head space (shown below) and equally divide the spices from the brine that will have settled in the bottom of the pan. Seal with lids and allow to cool before placing in the refrigerator. Give them at least a few days in the brine before serving them. They will keep, refrigerated, for at least a couple months.

“Non-cooks think it’s silly to invest two hours’ work in two minutes’ enjoyment, but if cooking is evanescent, well, so is the ballet.”
Julia Child

Link to recipe in bio 🎄