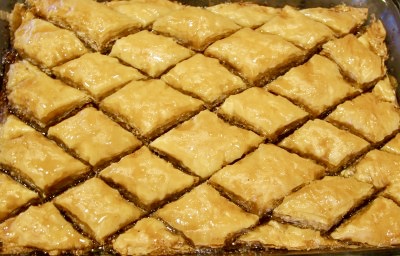 I’m a happy girl. As much as I love Bend, one thing we don’t get is a ton of great concert opportunities like we did when we lived in Chicago. So, I’m super excited because I just got tickets to see Alison Krauss and Union Station with Willie Nelson this summer AND we get to see The English Beat in May. It’s funny because in my English Beat/General Public days when I considered myself very “mod,” I wouldn’t be caught dead at a Willie Nelson concert. Now, I’m happy to say I’ve evolved to appreciate the genius in all genres. I also remember hating Alison Krauss when she covered “When You Say Nothing at All” in the mid-nineties, but I’ve since realized the error of my ways. Now she’s one of my favorite artists and her band, Union Station, is brilliant. So there you have it. And no, it has nothing to do with baklava, but I’m bored and alone, so I’m sharing.

See – aren’t I cool? This is me in 1986 or ’87. I love that I still had my dresser with the baby bunny on it, and that’s Bono peeking in on the other side. And of course, the extremely baggy sweater and the cigarette in hand because I was so cool. So glad I’m not cool anymore. I get to breathe easier and enjoy any music I want :).
I made this baklava for my cooking club a couple of weeks ago, and it was a hit! The theme was Mediterranean cuisine, so I took the opportunity to make it for the first time. I hesitate to say it was easy because that’s a relative term. I sometimes get eye rolls and the occasional “Well, it was easy for you, maybe!” from those who are not quite as fond of cooking/baking as I am. What I will say then is that it is reasonably simple and forgiving. It is time-consuming, though, and requires some patience with the fragile phyllo dough. If you, or someone you love, is a fan of baklava, it’s worth the trouble. After looking at several different recipes, I came up with this one using a bit less honey syrup than many I found (in one case, half the amount!). I also added a bit of salt and some cardamom to make the flavor slightly less sweet and more complex. The result was such that my cooking club friends were quite impressed, and Bob and I couldn’t stop eating what was leftover at home.
;
Before you begin: Be sure and follow the thawing instructions for the phyllo dough on the box and thaw in the refrigerator overnight. Having never worked with phyllo dough before, I went ahead and thawed about twice the amount I thought I’d need (the whole 16oz package instead of half). I was happy I did because when this happened (see the stuck together mess below), I was able to pull from the second package and have plenty for my recipe. I could have probably used the stuck together dough for something else, but I didn’t, I just tossed it. I felt slightly guilty for a minute then got over it. It’s not expensive, and it was worth the waste to be able to peacefully complete my task. I was a lot nicer to my family as a result. Also, the baklava needs to sit and soak up the honey syrup for at least 6 – 8 hours before serving, so take that into account before you start.

Combine your favorite combination of nuts in a food processor if you have one or chop them as fine as possible with a sharp knife.

Pulse until the spices are combined, and the nuts chopped finely.

Melt butter in microwave or on the stove.

Unroll one roll of phyllo dough, trim to fit 9x13in pyrex pan then cover with wet towel or paper towel as the dough tends to dry out quickly (hopefully you won’t need that second roll like I did).

Thoroughly brush melted butter on the bottom and sides of a 9x13in pyrex pan with a pastry brush.

Place one sheet of dough on the bottom of the pan, brush it with butter, then repeat until you have five sheets layered with butter.

Evenly sprinkle a layer of nut mixture over the dough.

Top with two more layers of dough brushed with butter. Repeat until you’ve used all the nut mixture and have about 4 or 5 layers of nuts with two buttered sheets of dough in between each layer.

After the last layer of nuts, layer five more sheets of dough brushing with butter over each layer.

Using a sharp knife, cut in diagonal pieces before baking.

While the baklava is baking, make the honey syrup.
In a medium saucepan, combine 1 cup sugar, 1 cup honey and 1 1/2 cup water.

Over medium-high heat, stir until the sugar dissolves and add the zest of one lemon.

Bring to a boil over medium-high heat, stirring often.

Turn heat down to medium and simmer for 15 minutes, stirring occasionally.

Remove from heat and stir in 1 tsp vanilla extract.

Spoon all of the syrup evenly over baked baklava.

Allow it to soak in the syrup for 6 – 8 hours before serving. I highly recommend it with your morning coffee.

From my favorite Alison Krauss song…

“And the people who love me still ask me
When are you coming back to town?
And I answer quite frankly
When they stop building roads
and all God needs is gravity to hold me down.”
Robert Lee Castleman