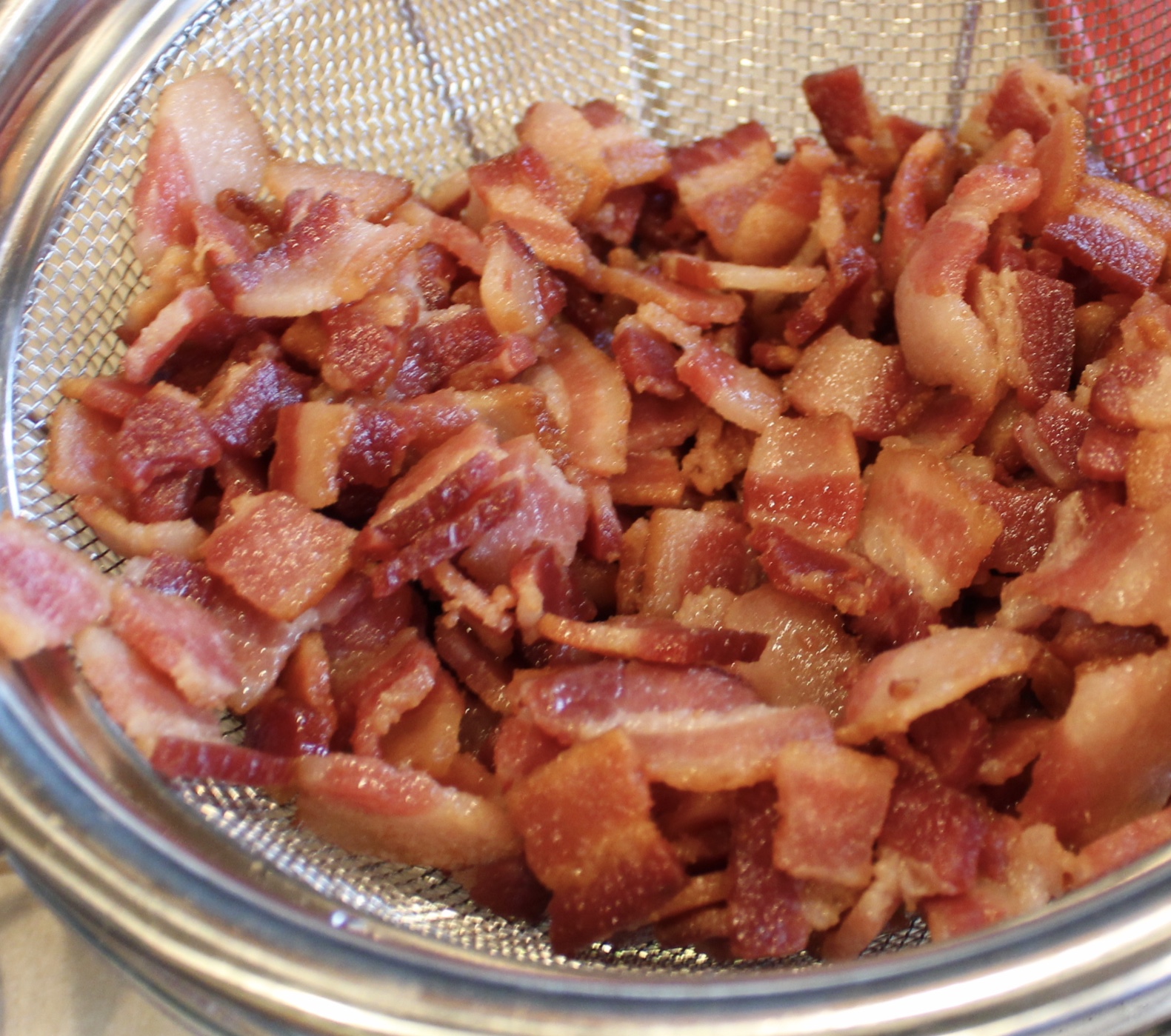 It’s great to have a batch of homemade bacon bits ready to add to soups, eggs, and pastas, as well as to toss in salads. The possibilities are endless, really, since everything is better with bacon.

I love the thick, center cut bacon at Costco. It comes in two 2-pound packages so I always throw one in the freezer. I use the oven baked method if I want strips, but I like to make bits out of the frozen package.

Start by cutting two pounds (or however much you want) of bacon strips into pieces, not too small as they will shrink down. If you are using frozen bacon, it’s easier to cut when it’s still a little frozen, so you don’t need to thaw it all the way.

Place the bacon in a heavy, high sided skillet or Dutch oven. I like to use the cast iron for the job. Turn the stove on medium heat and begin cooking, stirring occasionally.

If the bacon has been frozen, it will likely give off excess liquid as it cooks. Drain as much of the liquid out of the pan as you are able then continue to cook the bacon. You can turn the heat up to medium-high if you’re watching it closely.

Once the fat begins to render and brown the bacon, keep a close eye on it, stirring often, until the bacon bits are nicely browned and crispy.

The whole process can take 30 minutes or longer depending on the amount and thickness of the bacon and level of heat you use.

Place a stainless steel strainer over a heatproof bowl (it’s hard to see, but it’s under there). Carefully, transfer the cooked bacon bits to drain off the excess fat.

Store whatever you aren’t using right away in an airtight container in the refrigerator and use within 5 – 7 days. (Try not to eat them all!)

auntiechatter
•
Follow
Buttery, crisp but a little chewy, not too sweet, heavy on the oatmeal and chocolate chips; they're everything I want in a cookie. ⁠ ⁠ Link to the recipe in my bio! 🤩⁠ ⁠ I made these last week, and I have to admit, they didn't last long enough to make it to the cookie jar, partly because we ate them almost as fast as I could bake them. Also, I refrigerated the dough and baked them in small batches over a few days. There's nothing like freshly baked cookies!⁠ ⁠ ⁠ ⁠ ⁠ #oatmealchocolatechip #auntiechatterrecipes #lonelycookiejarblues #cookiejar #bake #homemade⁠ #cookies #chocolatechip #cookiesofinstagram #instacookies #baking #cookietime #cookielover⁠ #chocolatechipcookie #cookiemonster⁠ #cookie #coconutsugarrecipes #bendblogger #comfortfoodcookies #bakingcookies #soulsatisfying #momsfavoritecookie #learntobake #freshlybaked
View on Instagram |
1/9

auntiechatter
•
Follow
This takes practice.⁠ One of the most challenging concepts is that it is all up to us. ⁠ It can also be wonderfully liberating. ⁠ Try to find a moment of pure joy today. It can be as simple as sipping delicious coffee, listening to your favorite song, or snuggling with your dog. ⁠ Notice it. Feel it. Share it. 🧡⁠ ⁠ ⁠ ⁠ #findjoy #bethelight #spreadkindness #itsalluptoyou #yougetwhatyougive #gratitudeisagift
View on Instagram |
2/9

auntiechatter
•
Follow
I took the opportunity at Christmas to get the oyster recipes done for the cookbook because I knew I'd have people willing to eat them. Thankfully, Chef Billy was in my kitchen to shuck the darn things. They were super fresh and difficult to open. I did manage to do one before remembering why that was my least favorite job at the restaurant and realizing my hands are not nearly as strong as they were thirty years ago. 😬 ⁠ ⁠ Pictured from first to last: Oysters on the Half Shell, Oysters ala Treehouse (with a cheesy spinach garlic sauce), Billy patiently trying to reteach me how to shuck oysters while doing all the work, Cajun Pan-Fried Oysters, Scallops Normandy, Pasta Melange, Proscuitto and Prawns⁠ (Sorry, Billy's picture is cut-off - I thought I had fixed it 🙄) ⁠ I'm down to the last several recipes I need to put in the cookbook. Then it will be time for intense editing before I can print it and get a copy to scrutinize before making it available this spring. ⁠ Stay tuned! ⁠ ⁠ ⁠ #cookbookinprogress #cookbookauthor #restaurantcookbook #famiycooking #cheflife #pacificnorthwestcuisine #pacificnorthwestcookbook #eugenechef #shuckingoysters #oregonlife #familybusiness #finedining #seafoodentrees
View on Instagram |
8/9

auntiechatter
•
Follow
My girls and I are taking time to remember Bob today with so much love and gratitude for the time we got with him here on earth. (And with chocolate, we're eating lots of chocolate.) His humor, wisdom, and love remain with us. He constantly sends us signs that he is still near, like every time we hear a Smiths or Violent Femmes song just at the right time or see 111. We miss him more and more as time marches on, and can't believe a year has passed. ⁠ Sending love and appreciation to everyone who knew and loved Bob today. We know you're hurting and missing him too, and we are so grateful for the messages of support we've received today and throughout the year! ❤️⁠ ⁠ ⁠
View on Instagram |
9/9
View on Instagram